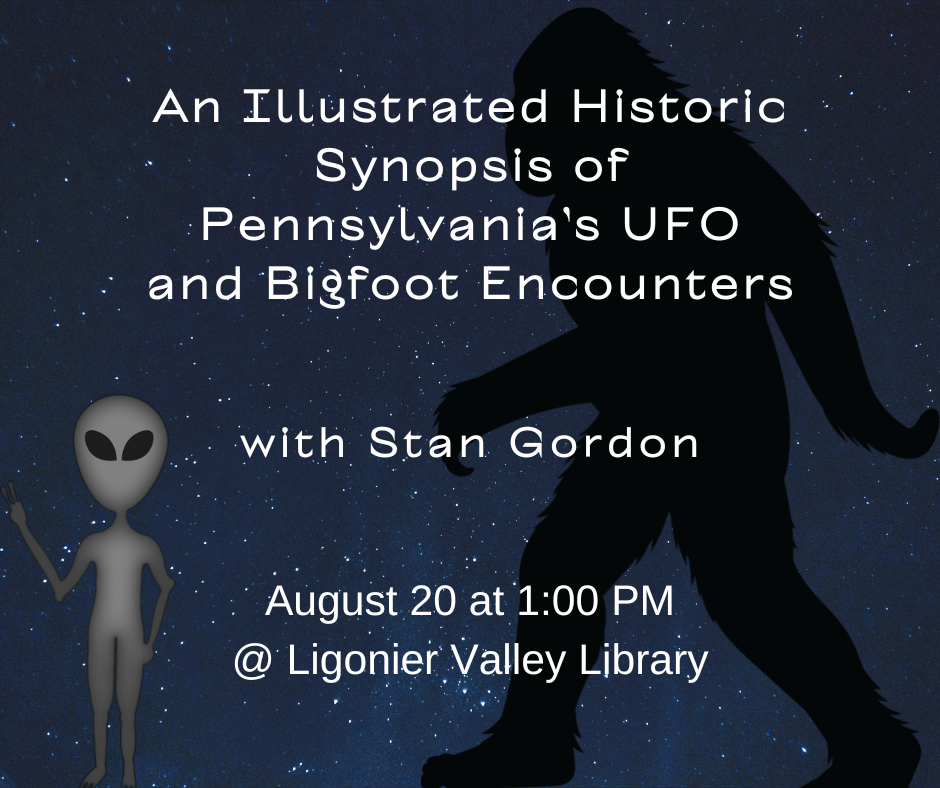 Join us on Saturday, August 20th at 1:00 pm for lecture with author Stan Gordon.

An Illustrated Historic Synopsis of Pennsylvania’s UFO and Bigfoot Encounters.

This illustrated lecture covers some early history of mysterious events in Pennsylvania, from the government investigation of UFO sightings to the continuous strange events along the Chestnut Ridge. Learn about the major 1973-1974 UFO and Bigfoot outbreak that occurred locally and the strange cases that occurred. Hear about encounters with mini-UFOs that approach close to people. You will hear about some of the most detailed UFO and Bigfoot encounters that have taken place in the Keystone State. Stan will also discuss some of the stranger aspects of both UFOs and Bigfoot cases. Here about some of the most recent strange incidents that have occurred around the greater Pittsburgh area.

Stan will have copies of his book available for purchase and will also do a book signing after the program.

Stan Gordon was trained as an electronics technician who specialized in radio communications. He worked in the advanced consumer electronics sales field for over forty years. Stan has been researching UFO sightings, Bigfoot encounters, and other mysterious events in Pennsylvania since 1959. Since then, he has been involved with the investigation of thousands of unusual incidents.  For many years, Stan led teams of scientists, engineers, and research specialists to investigate mysterious occurrences across Pennsylvania. He is the primary investigator of the 1965 UFO crash incident that occurred near Kecksburg, PA.

Stan has been taking calls on UFO sightings and other strange reports from the public since 1969, and he continues to receive unusual reports on a regular basis. He has given illustrated lectures both locally and nationally on the topics of UFOs, Bigfoot, Cryptids, and strange encounters since the late 1960s. Gordon is a former PA State Director for the Mutual UFO Network (MUFON), and was its first recipient In 1987 of the MUFON Meritorious Achievement in a UFO investigation Award. He was listed in the 2005 FATE Magazine special, The 100 Most Influential People in UFOlogy Today.

He is the producer of the award winning UFO video documentary, “Kecksburg The Untold Story.”  Stan is the author of four books, Silent Invasion: The Pennsylvania UFO-Bigfoot Casebook, Really Mysterious Pennsylvania, and Astonishing Encounters: Pennsylvania’s Unknown Creatures. Stan’s 4th book, “Creepy Cryptids And Strange UFO Encounters Of Pennsylvania”, was released on March 2, 2022. Stan appears frequently on radio and television programs discussing his research on these topics. He has been interviewed for TV and radio programs nationally and internationally. Stan has been seen on the History & Discovery Channel, SyFy Channel, Fox News Channel, Destination America Channel, and Unsolved Mysteries, as well as numerous other TV programs. He has been a guest on the Coast to Coast radio show several times.

In more recent years he was also seen on The Close Encounters series on the Science Channel, Monsters & Mysteries in America on the Destination America Channel, Monumental Mysteries on the Travel Channel, In Search of Aliens on H2, and UFO Conspiracies on the Science Channel.  Stan also has been featured in a number of documentaries, including “Invasion On Chestnut Ridge.” He also has a cameo appearance in the family movie “A Wish For Giants” that premiered in February of 2018. See www.awishforgiants.com for details.

The year 2019, will mark 60 years of research for Stan into the UFO & Bigfoot phenomena. Stan will be speaking at many events in 2019. He will also be appearing in two new films “Paranormal Bigfoot” and   the new miniseries “On the Trail of Bigfoot”.  For update information on upcoming events and reports see: https://www.stangordon.info/wp/

2020-Stan will be appearing in two new documentaries “On The Trail of UFOs” and “Mountain Devil 2: The Search for Jan Klement .” During 2020 and 2021, Stan was a guest on numerous radio and podcast shows nationally and internationally and other media events are planned for the future.

2021-2022-Due to the virus situation, keep checking Stan's website: www.stangordon.info for updates on speaking programs and UFO-Bigfoot events. Stan is scheduled for numerous interviews, media projects and lectures in 2022. Stan’s new book, “Creepy Cryptids And Strange UFO Encounters Of Pennsylvania” was released on March 2, 2022, and is available online at Amazon and  Barnes and Noble.

Stan’s books and DVD are available at: https://www.amazon.com/ and https://www.barnesandnoble.com/.